I'm delighted to be sharing with you my creation for this weeks new release by Julia Spiri. She's called 'Whimsy' and was so much fun to colour ( you can find her here) . I used my spectrum noir pencils ( for the first time in ages! I felt a bit rusty but I was happy with how she turned out.) The background was made with water colour pencils. 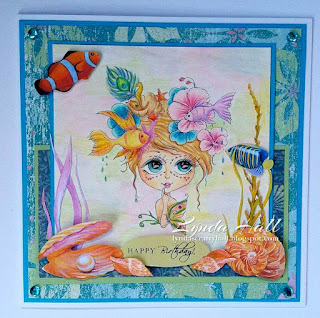 The embellishments are printed from Julia's Sea Clip Art set. If you haven't seen her watercolour clip art do check it out. It's perfect for digital and paper crafting and so so pretty.

Thanks for stopping by

You may remember my excitement at receiving some of my new Time Traveller goodies from Sheena Douglass last week. When I squealed rather loudly on Facebook that they had arrived, my friend ( and fellow crafter) Rachel cheekily suggested I make her something. I couldn't refuse that request- any excuse to get messy and creative gets my attention! Like me, Rachel makes a lot of cards ( she's also a colouring book artist- check her out here), and while I knew she would apreciate a card, I wanted to do something a little bit more special for her so decided to have a go at a steampunk canvas.

I know Rachel wanted a tutorial, and lucky for her I snapped a few pics along the way, so here is how I did it.

The first step was to embellish my canvas board. After applying texture paste through a stencil and some paper, I die cut some cogs ( these aren't from the Time Traveller set as I am still waiting on those but luckily I have other cog dies in my collection that did the job), the propeller from the set, and added some resin birds, a grunge board flourish and a chipboard man. I also used my melt pot to make nuts and a key. 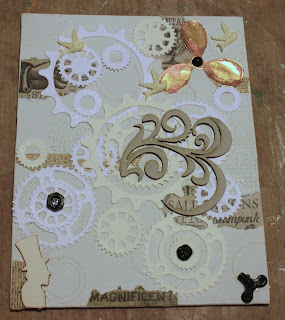 When the glue was dry, I went to town covering the entire piece in black gesso. Messy but so much fun! 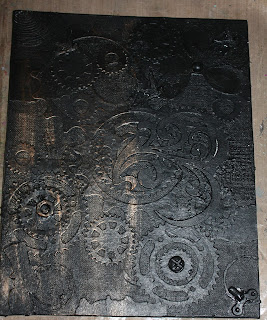 When the gesso was dry it was time to add some colour. I used some cheap acrylic copper paint, and some silver, which I added some gorgeous blue pigment powder to in order to create a rusting look. To dry brush you only need a teeny amount , then just work it over the project until happy. 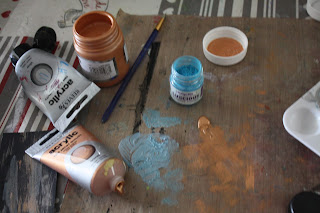 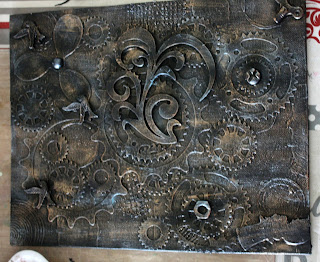 I really liked this effect, but wanted more shimmer and sheen and a metallic look, so I spritzed randomly with Cosmic Shimmer sprays and then used gilding wax to highlight some areas and really make the texture pop. 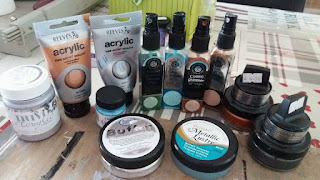 The final step was to die cut the balloon and stamp it, which I also heat embossed with copper. I coloured the balloon with distress inks and glued it firmly in place, using the flourish as the smoke. I added the sentiment stamp 'Set Your Own Course' which just feels very appropriate for Rachel as she's certainly a lady who does just that. 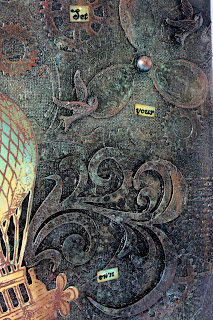 I must admit I was so thrilled with the final piece that I almost didn't send it to her ( I did make her promise to send it back if she hated it, but of course she loves it- damn!). Guess I'll just have to make another for myself now! 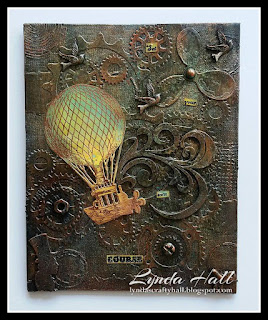 I have coveted the Sheena Douglass Time Traveller collection of stamps and dies since I first saw them being promoted on her fan page on Facebook and demo'd on Hochanda. At the time sadly my craft penny pot was empty though so I had to resist. This week Crafters Companion are running a great deal on part of the set , and it was far too good to pass up so I treated myself, and then I saw someone on a craft selling page on Facebook selling the others at a bargain price, and my amazing husband offered to buy them for me- what a star!! The CC one's haven't arrived yet, but here's what I have been up to with the ones that Chris got for me.

This collection is perfect for using with the new Ranger Distress Oxide inks, which is what I used to create the background to the first card. I spritzed the inks and smooshed brown card in it until I was happy, then dried off. I used a mask to create the wall effect with regular Walnut Stain distress ink. Then I applied copper gilding wax to some brown card and die cut cogs, which I then dabbled with some diluted gold paint with mica in to give a rusty effect.

I stamped the Thamgamabob image on water colour card and painted with Aquatint inks, and mat and layered onto coordinating cardstock. 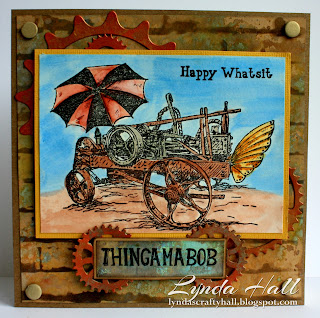 I am entering 'Thingamabob' into the following challenges:

For my second card I used the hot air balloon die and stamp set as my main feature. I love hot air balloons and have been fortunate enough to take 2 flights in the past, so this is definitely one close to my heart. Again I used distress oxide, in blue and green shades to represent the earth, and then die cut the shape before stamping and embossing in copper on to it.

I used a paper from Graphic 45's Steampunk Spells collection which I tore the edges to and distressed to add to the aged look I was hoping to achieve. Stamped onto this in Versamark and used a combination of Micaboss and gilding flakes, and Perfect Pearls to add the compasses, and sprinkled Frantage embossing powder around on top. I had another piece of card with oxides on that complimented it well ( I actually have a pile- they are addictive!) so dry embossed that and ran over the top with metallic gilding wax. The propeller is also from the collection, which again I heat embossed for added texture. 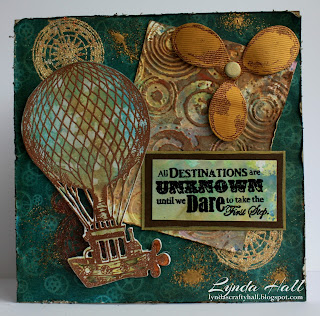 I am entering this balloon card into the following challenges:

I have so many more ideas for this amazing collection so watch this space. I just need the postie to hurry up and bring the rest now. I don't do patience well- especially when there is crafty goodness involved!

Have a great weekend

Happy Good Friday folks! I hope you all have a nice day planned ( that includes eating  copious amounts of hot cross buns of course!). I have had this entire Easter week off work which has been lovely as it's given me plenty of time to get my teeth into a project I have had sitting in my cupboard to make for over 2 years now. Pretty shocking eh? Well, I've finally put it right and am pleased to be able to share my finished Brusho's box at last.
The MDF kit was from Candy Box Crafts. It was easy to put together, although I found it a tad fiddly holding it in place while the glue dried,  but it was well worth the effort to be able to store my bits and bobs in something that makes me smile.

The backing papers were made with Dylusions sprays- I just adore working with these. So vibrant! I didn't really have a plan in mind, but then I never do. I tend to be a 'get everything out and wait for inspiration to strike' kinda gal. All I knew for this was that I wanted to use some of my collection of stamps from Visible Image. Their stamps were made for mixed media work so if you haven't seen them before do click the link and check them out. 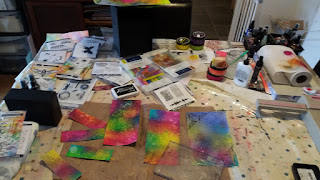 I set to work with masks, stencils, paint and embossing powders and of course the stamps, and soon had a selection of cut pieces I was happy with and the whole thing came together like magic before my eyes. The drawers dont come supplied with knobs, but I had these cute little knocker style ones I picked up at Ally Pally last Sept  from the Every Crafts A Pound stand which did the job beautifully once I had altered the colour with alcohol ink to make them more funky and less vintage looking. 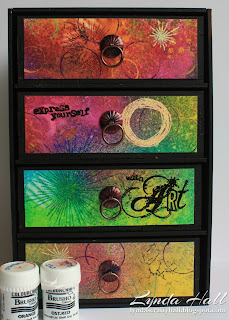 I hope you have a great Easter weekend. Thanks for popping in to see what I have been up to.

I'ts April 1st which means not only are the April Fool's jokes going about, but it's also time for a new Anything Goes challenge over at Crafts Galore Encore. This month we are kindly sponsored by A Day For Daisies and the prize is a generous $12 voucher for the store.

I have chosen to work with the cute Bot Four digi. I love him for boys cards! I teamed him with some robot papers from my stash to co ordinate with him perfectly. 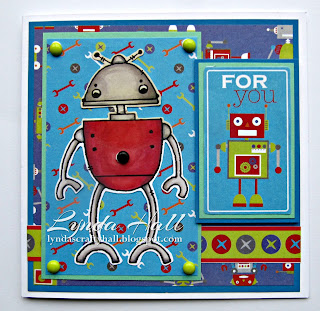 Do pop across and join in if you can. It would be lovely to see your creations.